Members of the Mandaue Chamber of Commerce and Industry (MCCI) huddled together to raise business-related issues directly to Mandaue City Mayor Gabriel Luis “Luigi” Quisumbing in another run of Mandaue Talks with Business (MTB).

This time, the talks centered around maintaining peace and order and reinforcing emergency response protocols. The MTB in April was held at 1521 San Miguel Brewery Inc., the sponsor of the event. 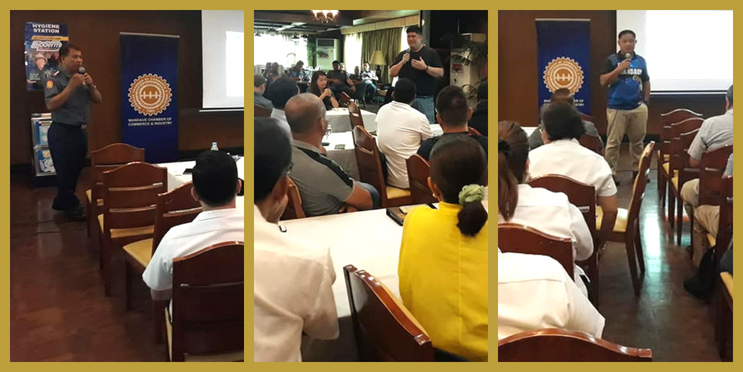 Mandaue City Police Office Chief Roberto Alanas presented the peace and order situation in the city. One of the tactics they did was holding a dialogue with pawnshop owners to enforce the Anti-fencing Law of 1979. The law defines fencing as the act of any person who have the intent to gain from selling items known to have been acquired through robbery or theft.

On the other hand, Quisumbing suggested to companies to set up protocols when a crime happens right outside their establishments. He said that if the hired security personnel do not want to get involved in the crime, they should call the police as soon as possible. He also said that monitoring of crimes will be done at the barangay level through the puroks.

In terms of emergency response, the mayor said that the zoning board of Mandaue City will now require disaster management plans when applying for a business permit.

Apart from MCCI members, heads of security agencies, station commanders, representatives from the Bureau of Fire Protection (BFP) were present in the MTB.

The MCCI plans to consolidate the contact numbers of each police station to be given to the members of the Chamber. #

Tagged with: Mandaue Talks with Business
Posted in Chamber News

The members and friends of the Mandaue Chamber of Commerce and Industry (MCCI) actively responded to the Mandaue City barangay... END_OF_DOCUMENT_TOKEN_TO_BE_REPLACED

The Mandaue Chamber of Commerce and Industry (MCCI) was hailed as the Most Outstanding Chamber in the Visayas and in... END_OF_DOCUMENT_TOKEN_TO_BE_REPLACED

The Mandaue Chamber of Commerce and Industry (MCCI) awarded people and institutions that have remarkably contributed to the city’s pride... END_OF_DOCUMENT_TOKEN_TO_BE_REPLACED

The Mandaue Chamber of Commerce and Industry (MCCI) duly honored their members, partners and sponsors for their constant support and... END_OF_DOCUMENT_TOKEN_TO_BE_REPLACED

Vowing to partner to “create an ideal economic climate for the businesses and stakeholders in their respective localities”, the Mandaue... END_OF_DOCUMENT_TOKEN_TO_BE_REPLACED